Coming from a (not-completely-post-)industrial area, I often wonder why it never spawned something like Manchester or Detroit did.

That's why I'm happily surprised, if not relieved, to read that we had one (1!) cold wave band around Charleroi.


They were called SIC, and they've just been dug up from the ashes of the local factories by Dark Entries, an US label that specialises in underground 80s music.

The band's own Francis Pourcel has a few tracks on his Youtube channel http://www.youtube.com/user/fransix7/videos?view=0
and you can also hear bits from the re-release on Soundcloud http://soundcloud.com/darkentriesrecords/sets/sic-thought-noises/

It always cracks me up. I don't know how to call them, but I think they belong together.

The French "détournements" like La Classe Américaine & Message à Caractère Informatif
(exploiting the fact that most non-French things are dubbed in French, they redubbed cut-up films and training videos with utter nonsense)


Not to mention "literal versions" of music videos


And now we have "as interpreted by a bad lip reader", who starts with a clever take on Rebecca Black's Friday :D

I could probably fit into that Chris Morris' Bushwhacked, Engrish and the incredibly popular Damn You Autocorrect.


Talking about "playing with language", I'm currently working with the Natural Language Toolkit (together with Lionel), that's damn fun/exciting/interesting :D

..burnt. So now I look like a stupid white tourist (by being red, if it makes sense)

I also had an Ukrainian Brotsch for lunch. And shark's fin for dinner. With deep-fried taro balls as dessert (oh yum).

The Shanghai Expo is... ok. Too many queues, I only visited Finland, a small country I forgot the name of, and Cuba (which was quickly visited. Rum, cigars). The european zone is actually a bit boring in its "having everything interesting hidden in a pavilion you can't get inside". The Asian and Middle-Eastern pavilions gave more to see to the people being outside. And the African Union space (whatever it was called) wasn't uninteresting at all (and way more accessible).
But nothing surprising either, anywhere. And so many people!

Still a few things to fix for The Gate, but it should be fine.

Damn that soup was spicy! Good thing I had some sweet fried pan rice-egg things afterwards.

Anyway, things are going better, we got a proper internet connection, we have a screen (which is the best we've had for The Gate so far)... basically, things need to be adjusted, but it's working.

Yes, by the way, Livejournal seems to be the only thing I can update from here.. Facebook or Twitter don't load at all, and the connection is REALLLLLLY slow (not to mention that I pay every minute I surf from the hotel :p)

It's a bit the same at the museum, which is an issue because Second Life times out every time it tries to log in. So ermm.. if they can't upgrade their connection, we won't really be able to make The Gate work... mhh...

I've never heard so much muzak in my life.

And I can partly blame microblogging for my lack of updates here.

So what the hell have I been up to since.. April (that seems to be the date of my latest proper update) ?!

Well working at iMAL.. my 6 months trial period is over now, so I'm now a permanent employee ;)

In June we had a big exhibition, which needed preparation, a whole website, and a lot of maintenance (as it was 8bit/chiptune oriented).

I then had to focus on the new iMAL website. The previous one was done in a semi-hurry during the preparations of the new venue opening, in 2007, and that temporary website stayed there for almost 3 years ;)
It's now fixed, thanks to Drupal :D http://www.imal.org/

Then we had Media Façades, a european festival around urban screens. We tried to involve the Dexia Tower, but they turned us down.. so we eventually made our own LED-powered façade, controllable from Processing! 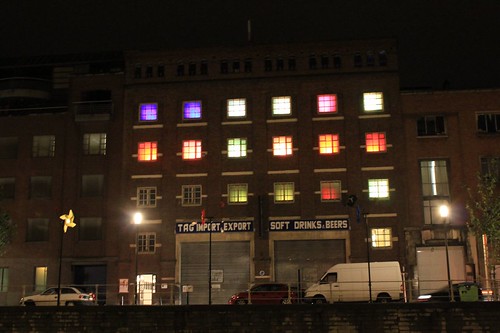 So of course I had to code some music visualiser ;) (vids soon, I hope)

To close the festival, we had, among other things, a workshop with Julian Oliver and his Artvertiser project. I had to take part in it ;) 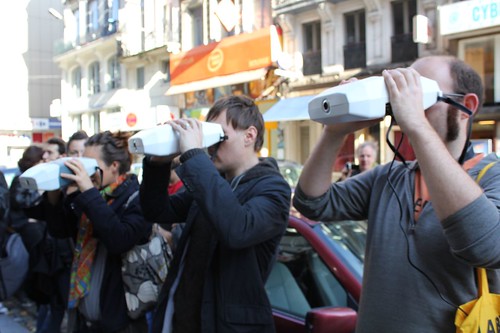 We were really short on time, the rush felt really.. artschool-like ;) I ended up doing something somewhat in relation with our Face project with Lionel.
By the way, we finally received the money of the government grant.. to work on that Face project. We haven't had time yet to work on it, so it's going to be done mostly in 2011 I suppose.

Félix Luque's latest work (currently exhibited at iMAL) feels somewhat close to what we're going to work on. It's both a sign that we're in right direction.. and a necessity to differentiate our project from his ;)

Annnnnnnnnd... last but not least :
The Gate (the First Life / Second Life installation) is invited to the Shanghai Biennale.. and so are we. Yes. I'm leaving on Thrusday, back 10 days later.
And a bit stressed about it, as I'm not used to travel that far, that long, or even to take part in a slightly "big" art event :| (impostor syndrome anyone? yes!)

Remember when I enthusiastically posted this ?

So Disney Channel (which is now a MTV for tweens) decided to make old Disney cartoons more COOL.

I don't think I need to add anything...

There are more here : http://www.cartoonbrew.com/disney/disney-remixes-old-cartoons-into-blam.html
(via Waxy links course)